I have been working on a few things, just not enough to get done and get posted.  Life and circumstances have a way of changing things a bit.

I have a few projects that I have been focusing on and off for the better part of 2019.  Mostly projects that I started and need to get finished.  I am planning on doing that for the rest of the year as I want to get all my UFO's done.  My past UFO's have included both actual projects I started and then there were programs that I purchased in the past and never started.  I am going to concentrate on working on only UFO's that I have actually started, for instance, BOM blocks are done, but need the assembly (sashing), borders, quilting, and binding, or projects that have been cut out and need assembly.

My first UFO is a Leader and Ender (by Bonnie Hunter at Quitville.com) from 2012 called Cheddar Bow Ties.  I have been working on this since 2013.  I wanted to have a total scrappy look, by not having any repeats in the blocks.  I planned on making two twin bed sized quilts, but ran out of the Cheddar I was using as the background fabric, so I found a solid cheddar fabric to continue to use, and ended up making a king size. 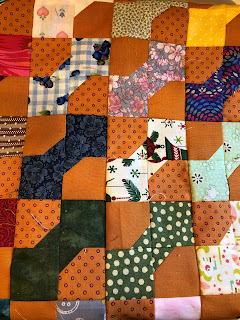 The second UFO project that I have been working on this year has been the Leader and Ender from July 2018.  It was called Jewel Box Stars once again from Bonnie Hunter at Quiltville.com.  Once again, I have opted to use my abundant amount of Thimbleberries scraps to do this project. 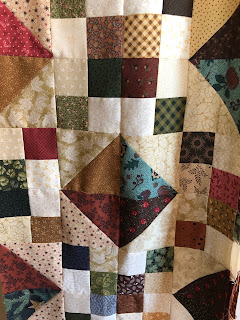 I still have some assembly to do, and a border to add, and this will be off to the long arm quilter.

My third, fourth and fifth project is not really a UFO,  but projects I work in while working on my main projects.  I make Quilt of Valor blocks for a FB group.   Starting last fall,  had a mystery block program, and I had been keeping up with the blocks until recently.  I have three left to do.

Each month the fabric layout changes, but the pattern is the same each month. It was quite surprising how the block looks so differently just by changing the fabric layout.   This is a sample of a couple of the blocks: 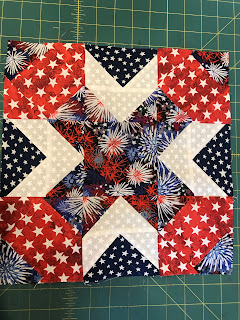 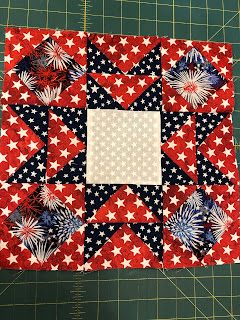 Then I did a presentation of a quilt made with donated blocks from this FB group, and one of the members quilted it and sent it to me to finish it. 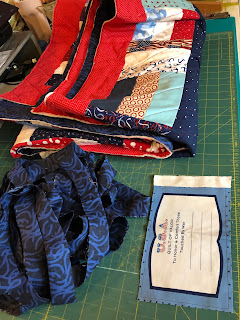 As soon as I got it bound and the label put on, I was able to present it to the Veteran. 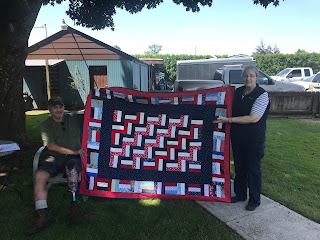 The third QOV quilt is for a friend of ours that I took his army uniforms and made two memory stuffed animals (one for his wife and one for his daughter), and then I also made a quilt for him.  More about the stuffed animals here. 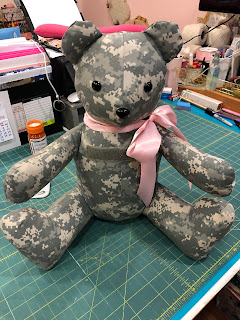 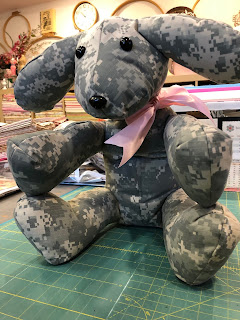 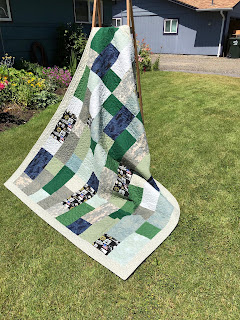 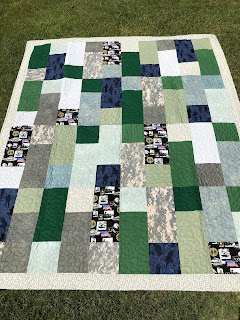 My fourth UFO is completed to the quilting phase.  I still need to cut the binding, bind it and take final pictures.  This one is from a monthly program back in 2009 for the month of June.  Each month the online shop Main Street Cotton Shoppe (no longer in business) would send a complete quilt kit that matched one in Lynette Jensen's book "Celebration of Quilts".  The program was called "Anniversary Club".  This month's quilt was called "Child's Play".  I did have a start of posting about it here. 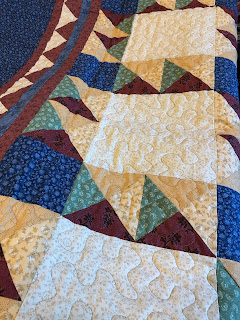 Then the last project I have been working on is the annual Quiltville Mystery Quilt, called Good Fortune for 2018.  Usually, I have this done during the time the mystery is going on, from Thanksgiving to New Year's, but I am still working on getting the piecing done. Again, I am trying to use up my Thimbleberries scraps on this mystery quilt.   I have one more border to do, and then it is off to the long arm quilter. 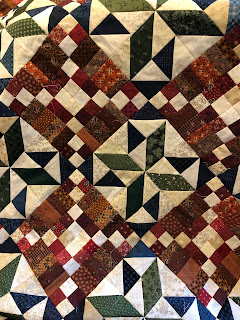 As soon as these are completed, I will do an individual post with more information and pictures, because I am using the blog mostly now to document my different finished quilts.